You can see a lot in two days.  Especially in D.C., where the streets overfloweth with monuments and museums.

Because it would take me about three years to write a witty paragraph about every place we visited, here is a pictorial representation instead, for your convenience and mine:

The Library of Congress, complete with outstanding Civil War exhibit. I was cruising through it, not very interested in accounts of battles, when all the sudden there was a letter Walt Whitman had written. There was the signed Thirteenth Amendment. They aren’t overly showy with their authentic artifacts in D.C.; It’s up to you to pay attention and discover what’s there.

Outside the Newseum was a display of that day’s front page from every state’s newspaper. Minnesota was solidly represented. 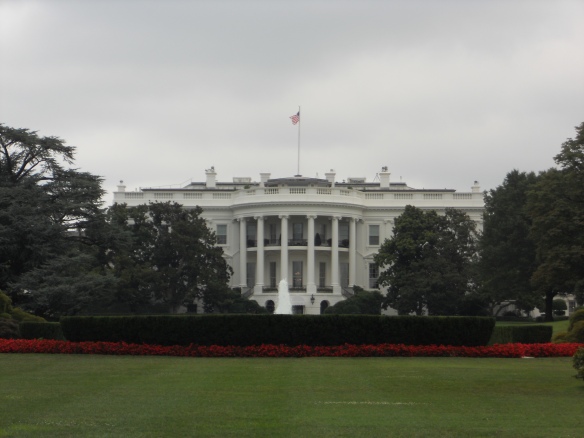 So, there was this house. And it was white.

The Capitol, where Minnesota’s own Amy Klobuchar set us up with a tour led by one of her interns. Also, I randomly spotted the Speaker of the House walking into his office, flanked by a few security guards. He stopped to chat about the upcoming Bachelorette finale.  He was team Brooks.

The Smithsonian American History Museum’s First Ladies exhibit, where we saw Michelle Obama’s inauguration gown (and shoes, which were refreshingly Holly-sized (aka about a 10)).

I will interject here to say that my favorite part of the entire D.C. trip was the Smithsonian Museum of Natural History’s exhibit Written in Bone: Forensic Files of the 17th-Century Chesapeake.  I could have stayed there all day; I have a soft spot for anthropology, and an even softer spot for history and mummies and mysteries.  The exhibit was about the human remains found at early settlements such as Jamestown, and what the bones tell scientists about the person they belonged to.  There were about five different skeletons on display, but before you got to view them and learn their stories, you learned what physical clues archaeologists look for to determine how a person died, how they lived, how old they were, etc.  It was an extremely well-organized exhibit that allowed you to feel, for about an hour, like a real archaeologist.  Truly a dream come true.

The Lincoln Memorial, which we only found after an extended hike.

The man himself, looking imposing.

Where Dr. King stood to deliver a rather famous speech. 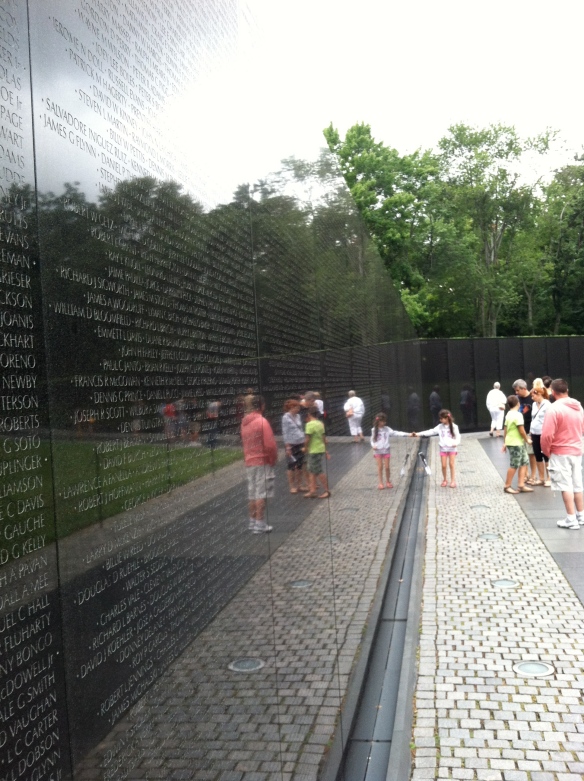 The Vietnam Memorial. The little girl in the distance just makes this picture for me.

Other visited spots that didn’t allow photography: The National Archives (The Declaration of Independence, Constitution, Bill of Rights, Magna Carta, LAND GRANT FILED TO CHARLES INGALLS, etc.), and the Holocaust Museum (exceedingly powerful.  Thoughtfully, provocatively arranged.  I almost burst into tears when I saw the piles of shoes which had been taken from concentration camp inmates).

Truthfully, I didn’t expect to enjoy D.C. as much as I did.  I knew I’d like the museums, but I didn’t think I’d like the city.  But it was lively and beautiful.  And filled with friendly people.  I certainly didn’t expect that, but let me tell you, Mom and I never stood on the sidewalk holding a map open for more than two minutes without a stranger walking over to help us find our way.  What’s more, when I somehow rubbed up against something (I suspect an escalator rail) and had black grease streaked across the rear of my white shorts, a woman stopped me to ask if I knew (I didn’t). What greater kindness is there?