There isn’t much to report around these parts.  I’m still unemployed.  It’s still raining.  Ruby is still number one in the nation for canine popcorn consumption.

A momentous event did occur yesterday, though: yesterday, my mother (who has just been set free for the summer from her teaching job), my sister (who has a proper part-time job, but who had the day off), and I (bum, along for the ride) went clothes shopping.

I think you all know how I feel about shopping.  I can’t find a specific post to tag, but I suspect that I’ve complained about it at least several times.  Here’s a recap anyway:

The concept of buying new things I have no problem with.  I like things.  I like newness.  I also like oldness, hence my closet, which is currently stuffed full of objects too “sentimentally valuable” for me to part with.  But the process of shopping, of going in and out of stores and dressing rooms and waiting in lines for dressing rooms and cash registers and then after all that waiting being held up so that the cashier (who is undoubtedly just doing as she has been told by corporate) can ask you to sign up for ten different credit cards and email lists … all of that is a nightmare to me.  And then there’s the fact that one must engage in such torture several times a year, that one must shop for winter clothes, for summer clothes, for shoes to match, and finally, stressfully, for a decently flattering dress for that upcoming wedding.

I am the sigher and the watch-checker who plops down on the nearest bench or inside the nearest quiet clothing rack while everyone else rushes around with hangers full of promise.

I am the toddler who has to be placated with an Orange Julius or a large soft pretzel so that I won’t throw a tantrum in the middle of Penny’s.

I am the attitude-laden teenager who digs in her heels and refuses to step into Forever 21 because everyone in there looks “snotty” and because even if hipster clothes fit, it doesn’t mean you should wear them.

Yesterday–somehow, magically–yesterday I did okay.  I shopped the sales racks, willingly entered dressing rooms, and (allow me to boast) didn’t buy an otherwise wonderful shirt because, as my mother warned, “the shoulders didn’t fit right.” I even bonded with a Sephora employee over the fact that thick hair sucks when it comes to styling, and can only be tamed with large dollops of creams and mousses and gels.

Dare I say it?  It was a pretty good day.  And maybe, just maybe, the new things I bought will make me feel just a little bit Forever 21 hipster snotty.  Because that’s fun every once in a while.

It has been a glorious day.  I haven’t had much opportunity to leave the house since graduation (alas, the plight of the newly alumnied and unemployed), but today the gentleman caller and I went to see Star Trek Into Darkness.

For the record, I think the first one was better (all ye Trekkies: I promise I am aware that there were other Star Trek movies before the 2009 version (to which I refer when I say “first”)).  Into Darkness was a little misguided in the plot department.  Scenes that didn’t seem very important (e.g. moving from one ship to another) were made into long, drawn-out affairs that didn’t do much to further the story despite their dramatics.  They became tiring after a while, and it felt like J.J. Abrams was using them to either add run time or to supplement an underdeveloped plot.  Further, the villain’s motives were highly unclear, at least to me.  I got the revenge part, but then there was something about being a peacekeeper, and then something about wanting to destroy all those of lesser intelligence. The gentleman caller and I agreed that had some dots been connected, the character development of the villain could have been a lot more compelling (and less confusing).  That being said, if you liked the “first” Star Trek, you’ll probably like Into Darkness.  All of the beloved characters are back, the action scenes are fast-paced, and the moments of humor (mostly at Spock’s or Scotty’s expense) are still there.

Also, if you go see it in 3D like I did, try not to visibly flinch every time something appears to jump off the screen.  People will stare, even in a dark theatre.

After the movie, we drove to Half Price Books.  I hadn’t been there in over a year, and it was a blissful reunion.  The funny thing about HPB is that when I go in with a list, I never find what I’m looking for, but if I go in with an open mind, I find some real treasures.  This trip, I went in without expectations (despite the one that I would probably buy something.  But that’s unavoidable in a bookstore), and came out with Suze Orman’s The Money Book for the Young, Fabulous, and Broke and David McCullough’s 1776.

The Orman is key for my post-grad plan for self-improvement and independence, and the McCullough is one I’ve wanted for a while: I read his John Adams while studying abroad, and enjoyed his style of historical storytelling very much.  He doesn’t presume to know everything, that David, but he does presume to paint as complete a picture for readers as he possibly can.  There’s a prose about his writing, rare, in my experience, for heavy historical tomes.  It makes his books accessible to the masses.  And for that–if I may get up on my “I hate highly specified academic jargon because it leaves people out” horse–I will laud him forever.

More graduation saga to come soon, I promise.  It’s been hard to sit down and commit with this out my back door:

We didn’t go Black Friday shopping, per se.  Mom and I patrolled Grand Avenue in St. Paul, where we did some (utterly justifiable, I tell you!) damage at Pottery Barn, Patina, and at Garrison Keillor’s Common Good Books (new location).  We may have also made an unrecorded Caribou Coffee stop, and we may have had to return ten minutes after leaving to retrieve mom’s sunglasses.

We swung home in the late afternoon to pick up my sister, who was back from her Target shift.  She’s currently taking an introductory clothing design/construction class at UW Madison, and needed to go to the fabric warehouse to pick up supplies for her final project.

I am not a crafty person, my friends.  There was an embroidery phase in middle school, and a knitting phase in high school, but both were short-lived, and neither produced particularly exemplary results.  To me, then, this scene looked rather bleak, and bordered on terrifying: 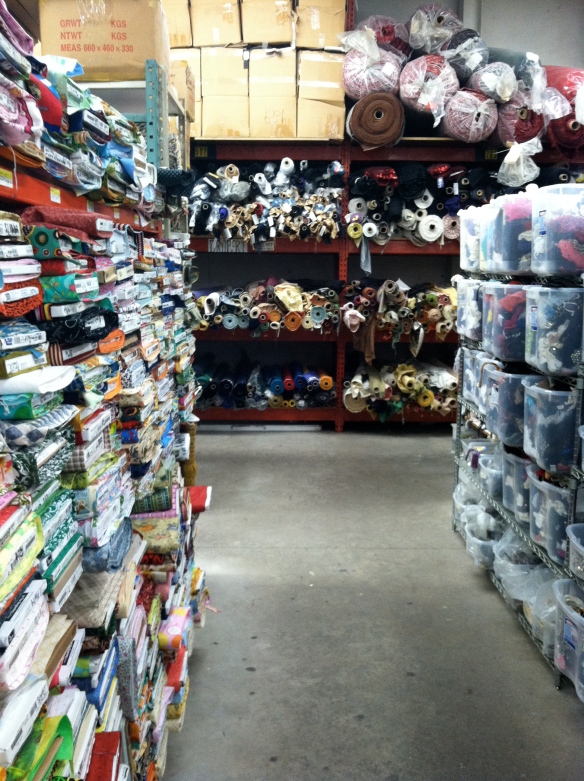 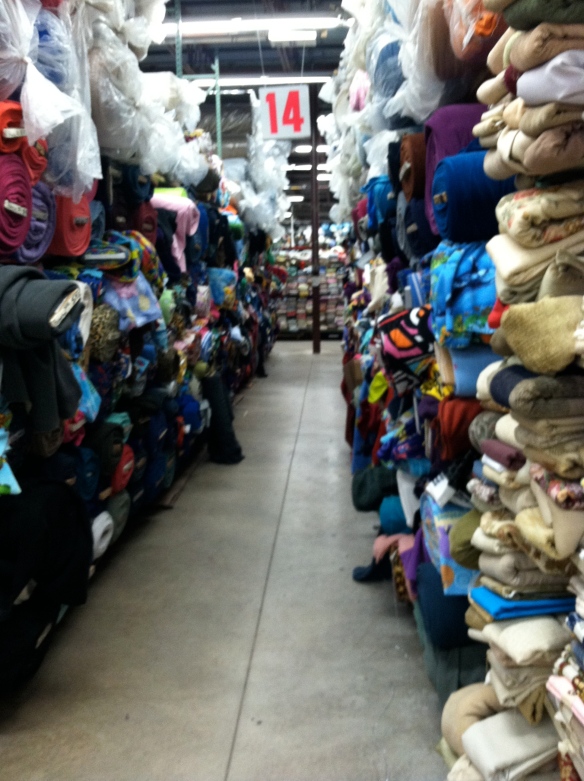 The labyrinth of fleece.

Tassels the likes of which I’ve never seen. If Quasimodo ever decides to do some remodeling in the belfry, I think these would serve him well.

Taken before being nudged out of the way by a woman who clearly respected the subtle distinction between cotton 111 and cotton 112 (a magnifying glass was produced for color confirmation).

“Why so cheap?” Holly wondered, peering dubiously over the rim of the barrel. The plastic circles glinted ominously, and Holly quickly decided that there must be something buried beneath, something that fed on the fingers of unsuspecting crafters. Just then, her sister Amy thrust her hand into the barrel. “Noooooooooo!” Holly screamed, not pausing even as two women in green smocks dragged her toward the exit.