It’s Easter time round these parts, which means that I spent the afternoon at school, running around filming videos for the student government elections, and the evening at home, dyeing eggs.

I feel so spoiled, home once again.  Even if it’s for less than 24 hours.

The geese are coming back.  I’ve been hearing them for the last few nights, and the first time I did, I actually stopped what I was doing and listened, trying to figure out what the noise was.  They’re much the same as they were last fall: same v flight formation; same grey-bodies-black-heads; the leader still opens her mouth against the high altitude rush and quacks the same harsh quack; and the rest of the gaggle, eager to chime in, answer her with equal harshness.  It reminds me of field trips, when my kindergarten teacher would ask my class (jokingly, I suspect), if we were all present.  “I’m here!”  We’d shout from our respective bus seats, loudly and unhelpfully.

Truthfully, even as I type, I’m not sure what the geese have to do with the rest of this post.  I suspect, however, that I’ll work them in somehow.

It’s been a hard week.  Actually, one of the hardest weeks of the entire school year.  And surprisingly, not because of papers or exams or presentations.  But because of student government.  I’m going to try to say this vaguely, so bear with me: I’m currently Election Commissioner for the spring student government (MCSA) elections.  What that means is that I organize “get out the vote” events, manage electronic voting, and make sure that all candidates are following the guidelines for legal campaigning.  It sounds pretty straightforward, and usually it is, but this week there were two major incidents that I had to deal with, and both became heated and ugly and personal.

One of the incidents, particularly, led to me taking a rather unpopular stance based on what I felt was fair.  That garnered a few phone calls, a few Facebook messages, and a lot of emails which involved calling me power-hungry and MCSA a “diseased organization.”  And for the first time in my entire life, I had to wake up and go to campus feeling like the entire student body hated my guts.

It all worked out in the end, thankfully.

But I can’t help feeling that this week has been a trial.  I’m not sure if I passed or failed.  I’m just glad it’s over.

As for the geese, well, perhaps they were chased out of the tropics by Spring Breakers.  Perhaps they ran out of Noxema and decided to retreat from the sun for a while.  Perhaps they’re heralds of the Spring, bringing her to Morris just when we were starting to think she would never come.

Perhaps, like other animals, they’re merely following their instincts.  Listening to that tiny twinge near their left ankles that tells them when it’s time to move on.  Perhaps they’re simply doing what they have to do, regardless of personal (animal?) desires.

Whilst laying under the dining room table today, petting Ruby (who claimed the spot as her sanctuary when she was just a puppy), I discovered something:

I actually remember doing the deed.  I think I was old enough to know better, but also old enough to have developed my still-present obsession with putting my mark in public (or semi-public) places.  No, I haven’t relieved myself in the middle of a square in Madrid like my middle school Spanish teacher (who claimed that everybody does it.  I was dubious even then).  But this blog, for example, gives me a sense of permanence.  My name is in the public record.  It’s in Google.  And even if no one ever reads it or cares, I’ll still know it’s there.

1. Buy your mother some flowers.

You may consider the Easter lilies at Cub, but after finding them pale and somber, it’s probably best to choose bright orange begonias instead.

2. Make dinner.  Salmon with balsamic cherry sauce, roasted brussels sprouts, and fruit salad is good for a warm day when the snow is dripping off the eaves of the garage.  Do not panic if you don’t remember how to cut a mango.  Have your sister help you, and sneak a few pineapple chunks in the meantime.

3.  Suggest a game of Mexican Train post-meal, and don’t complain when Mom plays a James Taylor album in the background.  Tease Dad for changing his mind on the placement of a domino, using the old family mantra: “A tile laid is a tile played.”

This morning found me in the dentist’s chair, staring up at a poster taped to the ceiling that said “every warm hand is a whisper from the heart,” which didn’t make sense to me at that particular time, and doesn’t make sense to me now.  I was grateful for that poster regardless.  I was also thanking my stars that Chris Martin exists, and that he sings loud enough that I can hear “Clocks” over the whir of brush and sputter of water squirter.

It’s a little ridiculous for a twenty-two-year-old woman to be scared (here I want to use a less polite word than I’ll actually use) to death of the dentist.  And I’m scared.  No matter how much resolve I have walking in the door, no matter how confident I am that I’ve brushed and flossed adequately, it’s all smashed on the tasteful carpet under my feet when I’m led to the chair.  Or the gallows, if you prefer.

You see, when I was decently young, but not young enough to be crying the way I did (maybe thirteen, fourteen?), a dentist had to drill at a cavity I had.  “I’m not going to use Novocaine, because I won’t be drilling near any nerves,” he told me, pleasant as could be. “You just raise your hand if you feel any pain.”  And so he began drilling.  The drill vibrating in my mouth was a little uncomfortable, but not painful.  And then suddenly, it was.  It was as if there was a rotten core to my tooth, strung through with thousands of nerves so that no one could get too close.  And that dentist had just burst through all of them and was drilling on the one soft spot that was more sensitive than any other part.  I raised my hand as high as I could.

So he kept going, and it kept hurting more than anything I’d ever experienced, and salty globes were sliding down my face, and my (still raised) palm was sweating.

In the car I told my mom that I was never going back to that dentist.

She let me switch, and I haven’t had such an unpleasant experience since, but I’m still wary.  I didn’t put on mascara this morning because I didn’t want it to run if I cried.

So this all explains why it’s so important that I can hear Chris Martin and that I have (albeit confusing) posters to distract me.  Because otherwise I’m confident that I’ll snatch up my purse and flee at the first mention of drilling.

It was adventure day in St. Paul for Holly and the Gentleman Caller.

Cossetta’s for pizza and antipasto salad (I ate the cheese, he ate the jalapenos and tomatoes.  I think I got the better deal):

Grand Ole Creamery for ice cream (it tasted a lot better than this young man betrays): 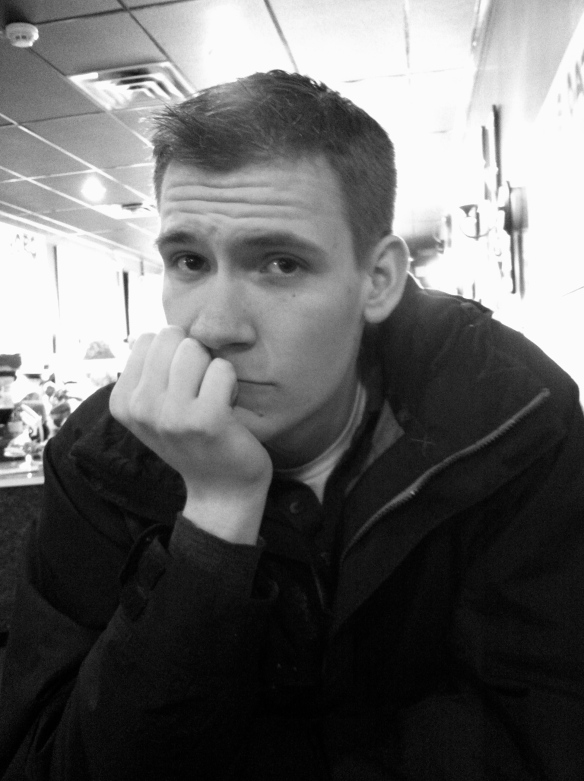 The laundry situation was a downside.  All the way in the basement, and must be done by hand.

The place is move-in ready, which is a perk: 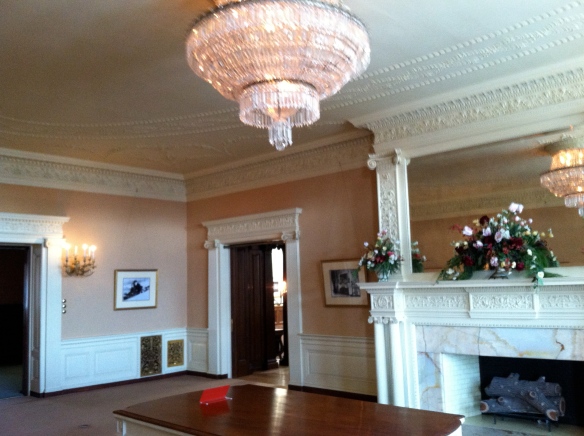 And has lovely outdoor verandas: 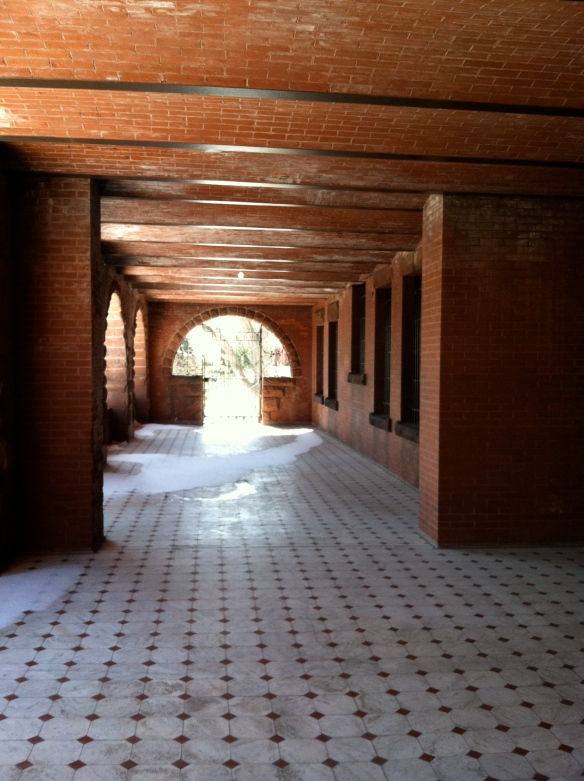 And my goodness, we could attend Mass right across the street!

In the end, the house was a little out of our price range; so, we ditched the realtor and walked over to the cathedral: 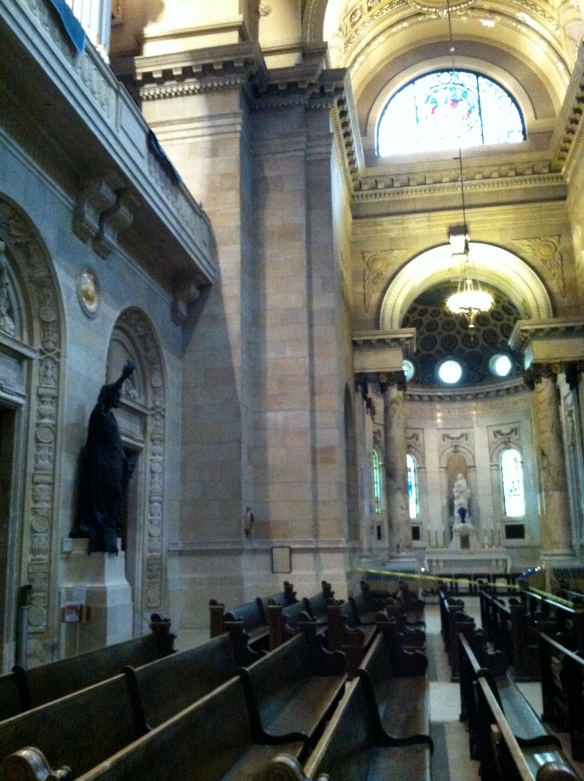 Not conducive to good photography, but very beautiful regardless.

Then, filled with good food, stuffed with culture, and sighing at the sunset glowing orange in the rearview, we drove home in the Subaru. 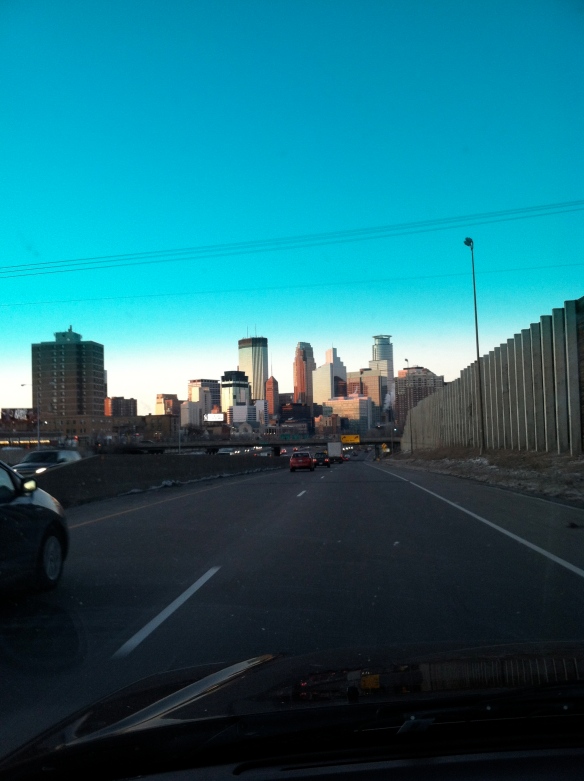 I thank the Lord for the nighttime.  As soon as it ticks past midnight, something in me clicks on.  It’s inspiration time around these parts.  It’s dark outside, it’s quiet, it’s perfectly acceptable for me to be on the couch swathed in blankets instead of doing something productive like shoveling snow or shimmying into my running tights for a jog.  My computer pulses silently, its white light hovering close to its metallic surface, and then pulling back again, dimming.

Ruby, our dear dog, who used to look like this, but who has now grown up somewhat (in stature, not in maturity), 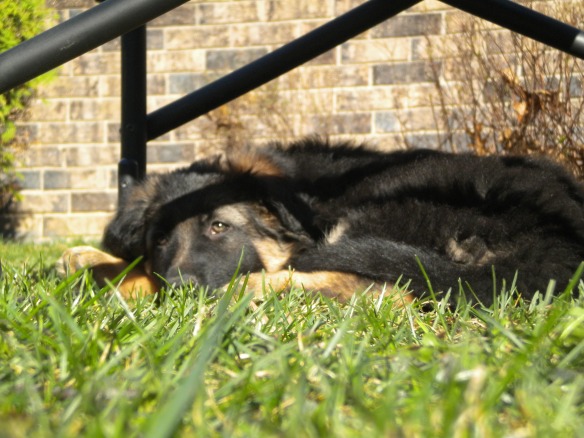 is lying next to me, her back curved against the couch.  She huffs every now and then, whips her tail a little in her sleep.  Ruby carries around the head of her Christmas stuffed raccoon—its body long lost—as if it is very precious, and has been taking great care lately to infuse it with slobber and stray fur to make up for its recent encounter with the washing machine.  She hardly stirs any more when I read a bit of paragraph aloud, or when I rouse myself for juice or phone charger.

This is my time, after all.  It has always been this way.  I no longer expect anyone—including the dog—to stay awake for it.

Eight Days a Week
Create a free website or blog at WordPress.com.