Among today’s features was 51% humidity, which means (this is for you Arizona folks), that you cannot stand on your front stoop for more than thirty seconds without being drenched in sweat. If you’re like me, your hair will also poof out immediately, allowing you to do a fair impression of Helena Bonham Carter’s Bellatrix Lestrange.

Despite the less-than-desireable weather conditions, I’ve spent much of the day outside: I took Cherry and Ponyboy on a park tour today.  They’ve discovered the joys of the underdog, so of course they each needed several before I could collapse on my own swing for a rest.

Then there was cat sitting to be done.  I’m currently taking care of four different cats at two different houses, so this evening I had an interesting time biking back and forth between the two, making sure all felines were fed and watered, and pausing for a few glorious moments at each house to enjoy the air conditioning.

Now home, I’ve planted myself in front of my fan, and plan to take care of business until 9 or so, at which time I will drop all work and watch this:

Last night, braving the hordes of mosquitos that had somehow located the narrow opening in the domed ceiling, I looked through a telescope for the first time.  Given, it was for five points extra credit, but I don’t talk about that; I probably would have gone anyway.

The observatory is a dim, round room that looks like something out of Harry Potter.  A spiral staircase leads up to a small platform dominated by the telescope itself.  While the prof and a physics TA found the coordinates for each star and positioned the telescope accordingly, we lined up on the staircase, slapping at our legs intermittently.

When it was my turn to look, I crossed the platform, climbed the small ladder by the telescope, and stood on my tiptoes to peer into the tiny hole of light in the lens.  And there was Saturn, looking like every picture I’ve ever seen of it; a round ball perfectly encircled by a wide band.  It was completely gold, like someone had made a Saturn cutout and pasted it against black paper.

“Is this real?” asked the kid in line behind me, upon seeing Saturn for himself.  We all laughed, but his silly question was surely a sentiment shared by all of us.

We’ve looked up at the sky for our entire lives, staring at the moon and the stars and the occasional planet or satellite.  But to us, they’re stationary pinpricks attached to a velvety universe.  There’s nothing that appears so peaceful, so utterly unchanging, as outer space.  And yet, looking through that telescope at nebulas and clusters and planets and the Moon, I finally grasped how very tumultuous, how alive outer space is.  Things are in motion up there.  Bodies collide, bodies explode, bodies are created and shaped.

And we’re such a very tiny part of it all. 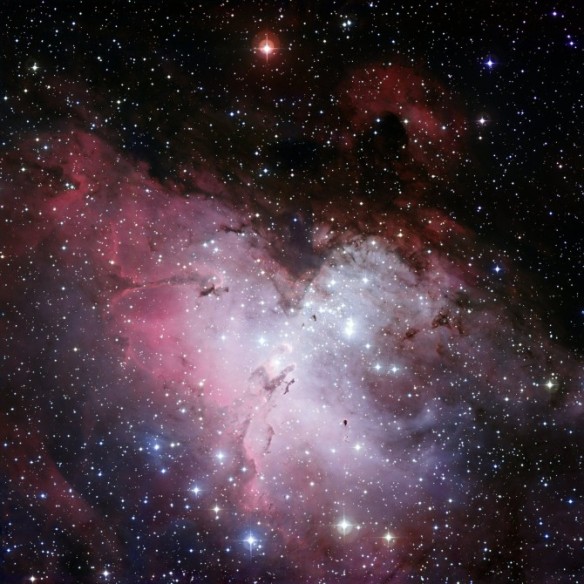 The Eagle Nebula, which we also viewed.

This afternoon as I trudged through the Science Building on my way to class, I was tired.  Tired because I can’t sleep in the the summer.  Not by choice, but because apparently something in my chemical makeup decides that it’s more fun for me to lie awake at 4 am, or to awaken suddenly after a dream in which my right hand sports a constellation of disgusting bug bites.  Tired also, from keeping up with four kiddos under 4, all of whom are delightful, but all of whom have seemingly bottomless energy stores.

I paused briefly, as I am wont to do, by the snakes’ cages.  8-Ball the Ball Python was curled snugly in his heated box, but Ramses the Boa Constrictor, who I have rarely seen move, was sliding over and around his faded tree limb.  Old skin was peeling off his muscular body in thin white sheets, and he seemed desperate to be free of it.  Every so often he lifted his head and neck high into the air and peered around in agitation.

I came back to the snakes as soon as the professor nodded us on our ten minute break.  Someone from the biology department had apparently been in to clean, because Ramses’ skin was piled on top of his cage. 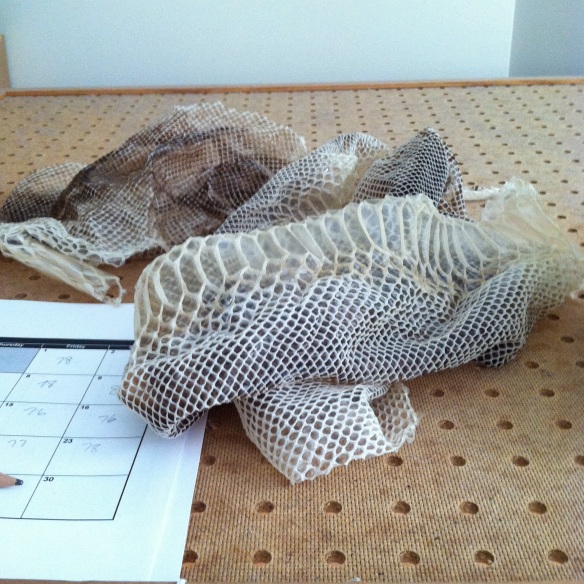 I couldn’t resist touching it, and was a little shocked that it felt exactly the way I thought it would; it was crackly and dry, like a piece of your skin peeled from a bad sunburn.

Even later, after class was finished, I plopped right down in front of Ramses to watch him finish the job.  There were still bits of shredded dead skin hanging from the sides of his head.  It took him a few turns around his rock and water bowl to get rid of them. 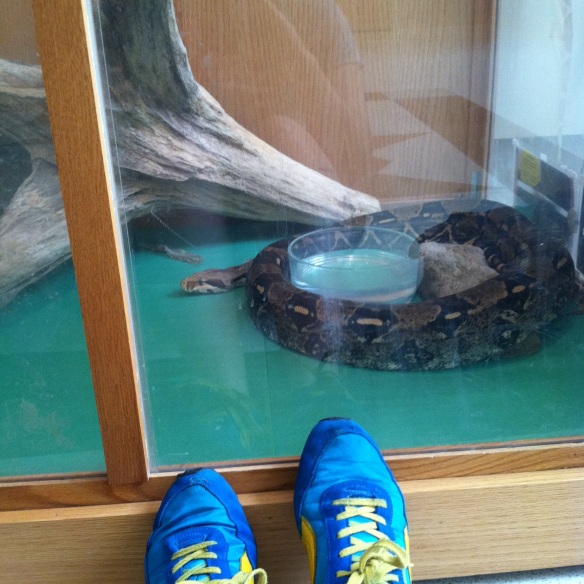 I was shocked and saddened when, during my morning IMDB perusal, I read that Nora Ephron, writer extraordinaire, has passed away.  It doesn’t seem possible, because to me, Nora is the epitome of witty, charming, effervescent screenwriting.

You’ve Got Mail, as a matter of fact, is the first movie I remember calling my favorite.  Since then I’ve tiptoed back towards the fulcrum, claiming to have multiple favorites, but the fact that You’ve Got Mail was first continues to resonate with me.

Oh for the good old days when a Friday night sometimes meant a trip down to Video Vault.  Inside, where it smelled like stale popcorn and tanning lotion (from the bed they kept tucked behind a black door), I felt that I could go in a hundred different directions at once. Mary-Kate and Ashley movies were always good, but so were Rainbow Brite, Baby Geniuses, and The Babysitters’ Club.  When it came down to the wire, though, and Mom was calling me from the register, I’d often snatch You’ve Got Mail.

It’s a romantic comedy that doesn’t require parents to cover their children’s eyes (a rarity nowadays), and what’s more, it’s a film with lightness that appeals to young’ins, and with cosmic messages and endearing characters that appeal to adults.

“Could it really happen?”  We wonder.  “Could two people, enemies in the real world, meet online and fall in love without being the wiser?  And could those two people magically end up kissing at the end, dog leash wrapped around their legs?  And could such a story actually interest people who are clearly grounded and wise to such idealism?”

But it does happen, and as it does, we to sigh and laugh (“Good thing it wasn’t the fish!”) with Tom Hanks and Meg Ryan, who were so young and lovely.  And we get to forget, for a while, that Twilight exists, that Ghost Rider 2 exists, and that we’re watching a movie at all.

Tonight was one of those nights when you go to the grocery store fifteen minutes before close.  You snatch things off the shelves haphazardly, feeling a little lost without your usual list.  You feel your chest swell with pride when you pick out something that’s on sale, and you stand, cushy tennis shoes on unforgiving tile, for a few moments to deliberate over something that’s not.

Outside, the air has cooled significantly, and the sudden darkness drives you to the sidewalk, where you trot with a gallon of milk in one hand and a bag of palm-stripping weight in the other.  Every so often you have to stop and switch hands, sighing as the numbing gallon settles against your new rope burn.

Back at home, you unpack quietly for a few minutes.  That is, until you pull the large container of oatmeal out of the bag, and open the cupboard to discover an identical, nearly-full container within.  You bought oatmeal last week.

My third-to-last first day of class was today.  It was Introduction to the Solar System, my sole summer class, and my sole remaining general education requirement.

1.  The professor seems kind, and is thorough about providing examples when he’s explaining something.  I don’t think he has a lot of self-confidence about his lecturing, though; I was tentative about asking questions because they seemed to disconcert him so much.

2.  I remember learning about the solar system in elementary school, but I haven’t really touched it since.  It’ll be nice to get back on the horse in that department, even without poor little Pluto.

3.  “This class will not be math intensive” = huge sigh of relief.  And then, to my despair, math came regardless.  We received a refresher course in trigonomentry, scientific notation, and geometry.  Oh, boy.

4.  I know several people in the class, which is helpful for the exchange of disparaging looks.  And for general merriment in the lab.

6.  On my walk home tonight, I picked out the constellation Leo in the sky.  Now that’s progress.

This is me, via the Morris Campus Cam.  My friends Maddie and Seth, who are summering in Washington state, messaged me about forty-five minutes ago:

“We’re creeping.  Go stand out on the mall.”

In other news, this happened:

What strikes me is the part where they say that twice, females strategically pushed at George laid eggs, but both times, the eggs were infertile.  It’s as if George knew he was the last of his kind, and preferred to remain that way, as a sort of testament to dying breeds everywhere.

Here’s another testament, once that leaves me wondering what the heck I can do to help.  Because these numbers are drastic.

Eight Days a Week
Create a free website or blog at WordPress.com.